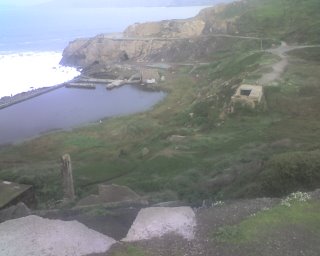 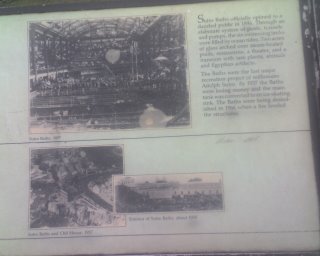 The thing I love about the Bay Area is that you walk through bits of literature and history. Like the Sutler Baths, which burned down 30-40 years ago, and which were used to shoot a scene in the movie Harold and Maude. Elsewhere, you wander through the land of the Beats in the North Beach neighborhood around City Lights, see the literary ghost of Steve McQueen pitch down Nob Hill streets, and come across the settings of Tales of the City. You end up with a feeling that's the opposite of nostalgia--the feeling that if something happened here, and here, and here, you might be about to step into the middle of a story of your own at any moment.

The corollary of this idea, or maybe just its twin, is the sense you get from everyone you talk to that their career is just something to pay the rent; they're really in the middle of the story that's happening right at the moment you're talking to them.
Posted by scott at 4:38 PM No comments: 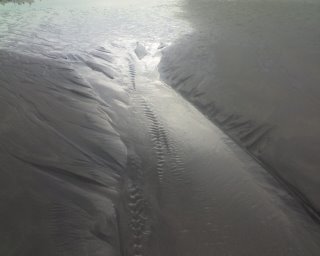 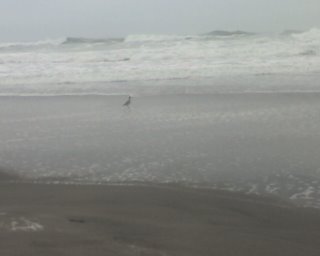 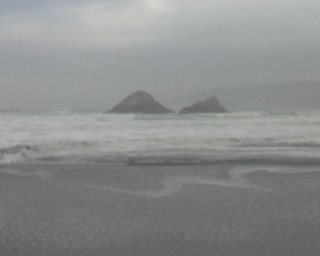 Somehow, the Pacific sounds more like an ocean should than the Atlantic. Maybe it helps that I was up near the Cliff House, where the rip tides and sharp rocks make a midnight winter swim an exciting experience.
Posted by scott at 4:31 PM No comments:

Chad invited me to a party at Dan and Donnan's place. Even with the address, the taxi driver couldn't figure out where the party was...he should have just looked for the crowd of guys standing around smoking and looking for something to blog.

As soon as I said hi, the crowd introduced me as "that blogger from Chicago" and themselves as "DanChrisMichaelChrisDaveandNick". They fed me on red wine and chocolate mousse, while Donnan sang holiday songs from Hedwig. Chad showed up just as I was leaving, so unfortunately, we didn't get to chat as much as I'd have liked. Still, I got to meet his cousin Scott, also from Chicago, and a number of SF's most interesting people.

I'd love to say that we all hit the Endup after capturing all their URLs and becoming BFF with each and every one of them, but jet lag got the better of me, and I collapsed until the morning.
Posted by scott at 4:15 PM No comments: 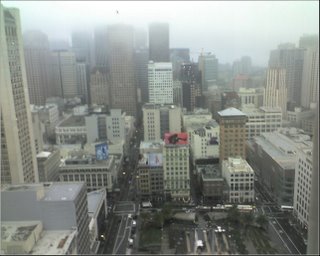 Got up early in the morning after a late night flight to SFO. I decided to charge up the side of Telegraph Hill first thing off the bat, bundled up in a wool sweater, jeans and scarf. Appropriate for Chicago weather, nearly fatal in 58 degree, high humidity San Francisco conditions after going up 45 degree streets. By the time I reached the top, I was completely drenched.

On the way back down, I stopped in Cafe Zoetrope, and told the bartender, "I just climbed Telegraph Hill."

Later in the day, I stopped in at Mea Cinis ("my ashes"), a newly-opened store that specializes in new hand made jewelry and Southeast Asian Antiquities. The store featured Chad's Venetian plastering job and the hand-strung pigskin hangings that looked like dreadlocks, as well as a kick-ass selection of art objects.

Dan, the owner, showed me around the place. When I mentioned that Chad's blog led me to visit, Dan shouted, and Chad appeared from the back, wearing a Geek Squad t-shirt. He seemed very surprised that anyone reads his blog...false modesty, judging from his site stats.

We started chatting about blogging and plastering and whatnot, and Dan showed me his twin brother's collection of 12th century bronze Khmer mirrors. A guy came in, wearing a massive pair of green galoshes, and started ooh-ing and aah-ing over everything, until he came to the mirrors, and gasped.

"Those are 14th century Khmer bronze mirrors," he said.

"No," replied Dan with a touch of pride, "they're 12th century Khmer bronze mirrors."

Just a standard day in North Beach. Always nice when you can find the one place where two people would come to argue over the dating of nine hundred year old art.

A bald woman came in next. I couldn't tell if she was bbald because of some ailment, or for religious reasons, or just as a fashion statement, but clearly, being bald worked for her. Dan went off to show her the bracelets made from something that looked like the mating between human bone and high-grade fractal rendering software.

Chad said, "look, since you don't know anyone in San Francisco...now you do. A friend of mine is throwing a party tonight, and I'd love it if you would come."

Despite jetlag and tired legs from the morning climb, how could I say no?
Posted by scott at 4:16 PM No comments:

Well, with 2006 nearly done, it's time to bottle up as much of the weirdness as possible before it all floats away.

The 10 most bizarre people on earth (via kottke (via mr) (UPDATED LINK)
Including the guy with the mutated twin lodged in his abdomen and the guy who ate a Cessna. I was briefly disappointed not to be included in this list, but as a friend once told me, "Scott, you're a nice amateur eccentric, but we have professionals here to handle the heavy lifting."

Dominionist Christians in the Pentagon, and the People who Hate Them
A classic political rant. I recommend that y'all give this guy whatever it is he needs to take care of the problem, or we may be living in a Left Behind book in no time flat.

The fugue state of the Bishop of Southwark (via Neil)

What happened to the Bishop of Southwark last Tuesday night? Was he mugged on the way home to Tooting from a pre-Christmas party at the Irish embassy? Or was he found wandering in a confused state in Crucifix Lane, near his cathedral, having supped not wisely, but too well?

The Rt Rev Tom Butler, 66, one of the Church of England's most senior bishops and a pillar of Thought for the Day on the BBC Today programme, says he has no idea. Others say he was seen sitting in the back of a Mercedes chucking children's toys out of the window and announcing: I'm the Bishop of Southwark. It's what I do."

And of course, the Russian Spy Polonium Sushi Caper.
As Bruce Sterling likes to say, this one is fractally weird. As the press boys like to say, this one's got legs. This particular little article highlights the victim's dining companion. Nice reading.
Posted by scott at 12:08 AM No comments: