In Mali, it appears that many or most of the rare manuscripts had been spirited away from the Ahmed Baba Institute by local Malians before retreating Islamists burned the library down.

In America, quadruple amputee and veteran Brendan Marocco received a double arm transplant that may enable him to have fine motor control over his new limbs. Awesome.
Posted by scott at 3:24 PM No comments:

Email ThisBlogThis!Share to TwitterShare to FacebookShare to Pinterest
Labels: books, Medicine, The Future Is Now, war and military

The Art of the Pitch

From Michael Weinreb's wonderful profile of Donald E. Westlake, prolific writer of mysteries and other books at Grantland:

[Westlake] used to attend a weekly poker game with Block, Penzler, and a group of writers and editors, and once he made an offhand mention that someone ought to write a satire of Arthur Hailey's disaster novels, Airport and Hotel, set in the men's room at Bryant Park, and call it Comfort Station. The next day, his agent called to say he'd sold the book.

"What book?" Westlake said.
He published Comfort Station in 1973, under the name J. Morgan Cunningham, seven years before the release of the first Airplane! movie. (Cover blurb: "'I wish I had written this book!' — Donald E. Westlake.")

Read the whole thing.
Posted by scott at 7:25 PM No comments:

Email ThisBlogThis!Share to TwitterShare to FacebookShare to Pinterest
Labels: writers

The latest annual installment of people doing things that make you want to go out and do those things. (via kottke)
Posted by scott at 3:32 PM No comments:

REM's "Losing My Religion" mode-shifted into a major key, which produces a really interesting self-cover of the original. The band subsequently reposted this on their own website. (via boingboing)


In Siouan languages like Lakota, in principle almost all words — according to their structure — are verbs. So not only (transitive, intransitive and so-called 'stative') verbs but even nouns often behave like verbs and do not need to have copulas.
For example, the word wičháša refers to a man, and the verb "to-be-a-man" is expressed as wimáčhaša/winíčhaša/wičháša (I am/you are/he is a man). Yet there also is a copula héčha (to be a ...) that in most cases is used: wičháša hemáčha/heníčha/héčha (I am/you are/he is a man).
In order to express the statement "I am a doctor of profession," one has to say pezuta wičháša hemáčha. But, in order to express that that person is THE doctor (say, that had been phoned to help), one must use another copula iyé (to be the one): pežúta wičháša (kiŋ) miyé yeló (medicine-man DEF ART I-am-the-one MALE ASSERT).
In order to refer to space (e.g., Robert is in the house), various verbs are used, e.g., yaŋkÁ (lit.: to sit) for humans, or háŋ/hé (to stand upright) for inanimate objects of a certain shape. "Robert is in the house" could be translated as Robert thimáhel yaŋké (yeló), whereas "there's one restaurant next to the gas station" translates as "owótethipi wígli-oínažiŋ kiŋ hél isákhib waŋ hé".

Lakota also has men's and women's spoken language versions. What a delightful language.
Posted by scott at 7:56 PM No comments:

Email ThisBlogThis!Share to TwitterShare to FacebookShare to Pinterest
Labels: languages

Why the Platinum Coin Must Never Be Minted

Tim Duy's post on why the Very Serious People inside the Beltway couldn't countenance the Big Coin option is deeply insightful:


As the debate continued, it became increasingly evident that the platinum coin threatened the conventional wisdom in very deep and profound ways.   It was a threat that could not be endured by Washington.

This realization hit me this morning, working on my last piece.  Begin with the effectiveness of monetary policy at the zero bound.  Or, more accurately, the lack of effectiveness as the Federal Reserve is swapping one zero-interest asset for another.  Rarely do we take this to its logical conclusion for fiscal policy:  If there is no difference between cash and Treasury bonds, why should we issue bonds at all?  Why not simply issue cash?  In other words, at the zero bound, what is the argument against monetizing deficit spending?

Indeed, the lack of any difference explains how Japan can sustain massive fiscal deficits year after year.  At the zero bound, cash and government debt are the same thing.  We would assume that as long as inflation was not a concern (which it wouldn't be at the zero bound), the fiscal authority could issue as much cash as it wants, so why couldn't it issue as many bonds as it wants?  After all, at the zero bound the two are equivalent.  Hence Japan continues to defy predictions of doom despite ongoing debt issuance.

Carrying the argument further, the illusion of a difference between cash and debt at the zero bound is counterproductive because it prevents the full application of fiscal policy.  Fears about the magnitude of the government debt prevent sufficient fiscal policy, but such fears are not rational if debt and cash are perfect substitutes. If cash and debt are the same, the fiscal authority should prefer to issue cash if debt concerns create a false barrier to fiscal policy.
...
Bottom Line: The platinum coin idea was ultimately doomed to failure because neither the Federal Reserve nor the Treasury could allow for even the remote possibility it might be successful. Its success would not just alter the political dynamic by removing the the debt ceiling as a threat. The success of a platinum coin would fundamentally alter the conventional wisdom about the proper separation of fiscal and monetary policy and the need to control the debt immediately.

Internet Activist and Reddit co-founder Aaron Swartz committed suicide this morning in his New York apartment. Appreciations of his life by Cory Doctorow and Lawrence Lessig.
Posted by scott at 5:46 PM No comments: 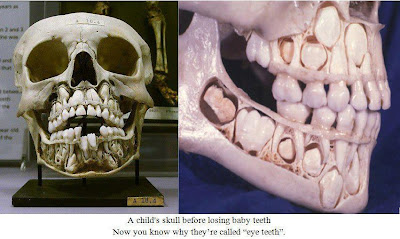 A nicely done dissection of the laminar bone layers of mandible and maxilla to reveal the adult tooth buds and cancellous bone prior to eruption of the buds through the gumline. Note how the canines are situated deeply within the jawbones, and how the buds are situated among the roots of the baby teeth.

We are once again at a point where we must allocate the Obama Administration's handling of a fiscal deal along the Stupid-Evil Axis.

Paul Krugman votes for Stupid, and thinks that future deals will be worse because the President is a perpetual caver. Tim Duy thinks we need to move somewhat toward the Evil end of the Axis, and that the President wants to structure future deals so that they are unpalatable to all parties, because he truly believes in centrism. As Robert Reich put it, centrists believe that the correct answer lies halfway between right and wrong. Duy:


I frequently see commentators saying that Obama is terrible at the bargaining table, but I can't help thinking that he is getting pretty much what he wanted.  Despite all the hate heaped upon him by the right, Obama just isn't a progressive, and we shouldn't expect him to seek a deal as if he was one.  After all, what progressive ensures a tax hike on the lower and middle classes (the expiration of the payroll tax cut with no offsetting cut elsewhere)?  Obama seems to believe the best deal is the one no one likes.

For my part, I simply think that you're in a bad place to begin with if you've made a choice that lies anywhere on the Stupid-Evil Axis. We cannot afford another administration that ends up on the Axis as regularly as the last two (Obama and Bush) have.