Can it be that I've forgotten to send you off to read Helen DeWitt's new short story excerpt? Well, wait no longer, and have a pound of seven year cheddar while you're reading. It is a lovely thing.
Posted by scott at 2:19 PM No comments:

Photographer Joe Simon's timelapse of Rio De Janiero. Wish I was there.
Posted by scott at 9:25 AM No comments:

Email ThisBlogThis!Share to TwitterShare to FacebookShare to Pinterest
Labels: travel

On the Shadows of Ideas

From a rough translation of Giordano Bruno's memory text, De Umbris Idearum. It's a big work in progress at this point. I'm sure someone with very good latin could make short work of it, but it's not easy to translate precisely. This is from the introductory dialog amongst Hermes Trismegistus, Philothimus (who represents Bruno), and Logifer (a pedant, representing Bruno's critics).

Continue freely; indeed, you know it is the same sun, the same art, that will both receive praise and also blame. That sorrowful night presents witches, toads, the basilisk, screech owls, and Plutonian rites, but [that day] activates the rooster, phoenix, swans, geese, eagles, rams and lions. When he’s in the East, creatures of darkness gather in their dens, while by his light, man and the creatures of the day come out to do their work. He invites them to this work, away from idleness. Heliotropes and lupines turn toward the sun, while the night flowers and herbs turn away. Rarefied vapors rise to form clouds, while more earthly vapors condense to form waters. Some shed a perpetual, continual light, others shine irregularly. The intellect teaches that they remain still, but the false sense tells us that they move. That which rises in this part of the rotating earth, sets in the .  The same in the arctic: sometimes, things appear to circle from left to right will at other times appear to move vertically. In some hemicircles, they move quickly, while in the opposite, they move much more slowly. The land which appears nearby appears to be larger, while more distant lands (from our perspective) smaller than the others. The most southerly of the North lands is the most northerly of the South. For those who have the horizon at right angles, the left and the right will be of equal size, but they will be unequal for those who look obliquely. The same distributes the darkness and the light in equal measure in the region between two parallels, but differently at different times. In this, the divine house of Earth, we receive slanting sunbeams, instead of ones precisely vertical. The planets (which some believe to be lesser gods under a second prince) likewise receive varying light upon their bodies (which they call the light of conception), turning different faces to him from the apogee to the aux, by latitudes and intervals.  (Even so the Moon (which many among the philosophers think is a second Earth), turns a face to that light, while turning the other face into shadow, where the Earth interposes its sad shadow on a hemisphere of the Moon.

The sun, therefore, while remaining the same forever, may also change its disposition, sometimes one way or another, depending on where one sits. Likewise this solar art, for ourselves, for other people, others yet to come, we believe that there may be differences in how it is received. 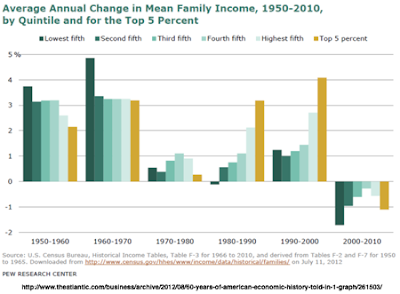 How American wealth was made, and unmade, over the past six deacdes, as shown by changing growth distributions in this graph by the Pew Research Center.

(via Brad DeLong)
Posted by scott at 3:01 PM No comments:

Email ThisBlogThis!Share to TwitterShare to FacebookShare to Pinterest
Labels: Economics 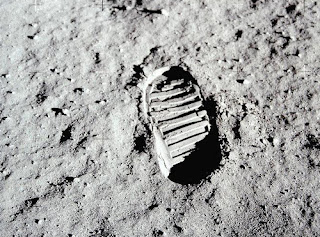 Email ThisBlogThis!Share to TwitterShare to FacebookShare to Pinterest
Labels: obits

Rachel Maddow connects the dots on the "legitimate rape" movement. Shorter version of Akin's argument: women get pregnant as a result of sinful desire, and are therefore complicit in their own rape. Disgusting. This is the official position of the Republican party as well.


Visit NBCNews.com for breaking news, world news, and news about the economy


Vi Hart talks about what do do in math class when you're not learning how to graph parabolas, why learning how to think is harder, yet more important than learning what to think, and why cardioids are cool.

(recommended to me by Carol Schumacher)
Posted by scott at 9:57 AM No comments:

Email ThisBlogThis!Share to TwitterShare to FacebookShare to Pinterest
Labels: math

Mitch Was a Writer

Mitch Hedberg's advice for comedians: "Remember to write down any thoughts you have that are funny." (via Devour)
Posted by scott at 6:09 PM No comments:

Autonomous Sensory Meridian Response, also called "the tingles" and "head orgasm", has been getting a lot of attention over on Reddit. The phenomenon has also generated an entire genre of whispery videos that trigger the response in a subset of listeners. ASMR is described as an extremely pleasant sensation in response to certain stimuli. From Vice:


Maria, aka GentleWhispering (she didn’t want me to use her last name), has been triggered by everything from accented whispers to scratching grainy surfaces to being tickled when she was in kindergarten. During a Skype conversation I had with her, she described ASMR as feeling like “bubbles in your head,” and compared it to getting a scalp massage, but the sensation is on the inside. She went on: “It’s like a little explosion, and then just little sparkles and little stars going down [your back]. Depending on the strength of the trigger, it might just go into the top of the spine of the shoulders, but sometimes it goes down to your arms and legs, and other parts. Mostly, if you get it in your leg, it’s really exciting!”

When I watch the videos, they're very pleasant, but I don't quite get the full experience Maria and the Reddit group describe. Other people describe the triggering videos as "the most boring thing ever", which indicates that it's might be a hyperactive reward response to low intensity sensory input. Fascinating stuff--someone should do a study.
Posted by scott at 9:52 AM No comments: