Daniel Ingram has a successful career as an ER doctor, but he's best known on the Internet for being a meditator and meditation teacher. He's the author of Mastering the Core Teachings of the Buddha: an Unusually Hardcore Dharma Book, which I first read about over on Scott Alexander's blog Slate Star Codex here and here. Daniel made some waves in the dharma community by claiming to have attained enlightenment as an arahat. 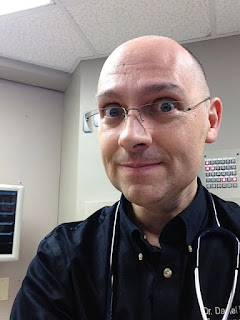 On today's podcast, we talk about the different ways to assess that claim, what states and insights may occur on the way to enlightenment, and what to do if you get yourself into a spiritual crisis of one sort or another. We also talk about some of my meditative experiences and how to use a candle flame as a focus for meditative practice.

I feel as though I did not communicate well during the discussion of visualization practices in the last part of the interview. While it is certainly possible to get some level of visualization going within the first day of doing practice, the quality, detail, interactivity and stability of visualizations will also improve slowly over 90+ days of effort. That's about the period of time it took me to develop a fully zoomable and rotatable model of human anatomy with full motion inside my head. It's also the amount of time it should take you to get through the ngondro (preliminaries) of Vajrayana, some of the journeying techniques, Jung's active imagination, and the spirit contact models for various ritual magic systems. I think there's some neurochemistry behind this, specifically an upregulation of serotonergic 5-HT2A receptors, which seem to be connected to creative/optimistic thinking styles. These same receptors are involved in the visual effects of entheogens such as LSD and psilocybin. But that's a discussion for another day. The upshot is that if you think your visionary experiences are good at the outset, keep working for a few months and they will gradually get better.

Enjoy this episode, and want me to keep making more? Download, subscribe, rate and review on iTunes

Want to hear more like this?
Pair with B Alan Wallace on Dzogchen and Dudjom Lingpa or Ben Joffe on ngakpa and Tibetan traditional medicine.

From the Archives: Nerdcon Stories 2015

In 2015, the team behind the highly successful and popular Nerdcon video conference, led by Hank and John Green, created a writer- and reader-centric convention called Nerdcon: Stories. I drove up there at the last minute to see a slate of authors who might as well have been picked out for me. While I've seen a couple of the panels online, I don't think these two panel discussions have ever been published by anyone: Tropes, Misinformation and Stereotypes: How to Identify and Avoid Them When Writing Outside Your Experience, led by Mary Robinette Kowal, and No Pressure: How to Keep Creating Once You've Technically Succeeded (Writing After Success), led by Patrick Rothfuss. Nerdcon: Stories may have shut down, but it was a bold experiment.

Nerdcon: Writing Outside Your Experience