State of the OH15 House Race

Collecting and reposting my state of the election notes from https://www.facebook.com/groups/IndivisibleOHDist15/permalink/505002666610097/
The polling from the week before the 12th's special election showed Rep. Stivers about 7-9 points ahead. The 15 point lead predicted by 538's "standard" model is likely an overreaction to the narrow R win in the 12th.
He has much better name recognition and is currently running an unopposed air campaign (TV/radio/internet ads), plus an incumbent advantage. He's also one of the Republicans' top fundraisers.
Against all that, this is going to be a blue wave year, with about a +10 advantage for the Democrats. Neal's fundraising has been much more vigorous than usual for the district, though to get up to par would require a massive surge. The Senate and Governor's races may provide some additional coattails.
Based on the distribution of votes from the past couple of elections, the Democrats need to bank large leads in Franklin County and Athens, and reduce the Republican lead in Madison and Fairfield (Lancaster area).
Franklin is a game of suburbs: Upper Arlington, Hilliard, Grove City, Obetz. (going from D-->R strength).
To win, the Democrats must have both an excellent ground game (GOTV), which I think they have, and an impactful and constant air campaign (TV/radio/internet). While I've tweaked Rick Neal about this on a semi-regular basis, it's really an area where ODP has fallen down, and the bulk of the criticism needs to fall on them. Failure to market on air leads to poor fundraising numbers and poor turnout. Failure to get on air in the summer allows their opponents to set the terms of the debate.
Absent a compelling purchased ad campaign, I'd expect that every down-ballot Democrat should be throwing themselves in front of every camera and microphone in the world, acting as if they've already won and are just waiting to be sworn in. Earned media can make the difference.

A compendium of four short films from the Victoria and Albert Museum:


This is a compendium of four short films with English subtitles. Sachio Yoshioka is the fifth-generation head of the Somenotsukasa Yoshioka dye workshop in Fushimi, southern Kyoto. When he succeeded to the family business in 1988, he abandoned the use of synthetic colours in favour of dyeing solely with plants and other natural materials. 30 years on, the workshop produces an extensive range of extremely beautiful colours. Mr Yoshioka generously made two gifts of naturally dyed textile and paper samples to the V&A in 2016 and 2017. The process of creating these samples was recorded for a documentary broadcast in Japan in May 2017. The programme also explored the background to Mr Yoshioka’s passion for natural dyeing and his long-standing quest to revive historical colours whose methods of making have been forgotten.

The Face of a Comet

David Hogg on Beating Your Critics

Camelia Elias holds a PhD and DPhil and spent the last twenty years as a professor of literature, most recently at Roskilde University in Denmark. Recently, she escaped academia to start an online school, Aradia Academy, where she teaches cartomancy (card reading); that is, how to read—yourself, someone else, books, pictures, films, the situation, the problem, or anything else—without belief, emotion, preconceptions or other obscurations getting in the way.

She recently said, "Why is reading cards fascinating? Because their visual language allows us to bypass everything we know or think we know."

Boiling our conversation down to the keywords, we talk about 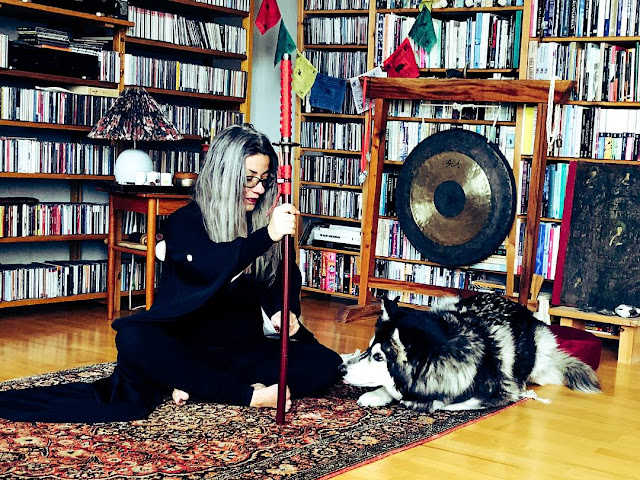 Download & listen to the show on iTunes.
If you enjoyed this episode, please subscribe, rate and review us over on iTunes. This helps us reach more listeners like you.

EP 041 Gary Lachman on the Lost Knowledge of the Imagination

Today, I talk with Gary Lachman about his latest book, The Lost Knowledge of the Imagination. We discuss the need to balance the analytic "survival mode" consciousness of the external world with an older way of thinking that prioritizes the inner landscape and the imagination. We also discuss the necessity of creative outlets to regulate how much of the sensory world we take in and process, to open the valve all the way for peak experience and dial it down so we remember to do the dishes.

I spend a good bit of the interview groping toward, but never reaching, the concept of a gestalt as a shorthand mental representation of external or internal objects. Some events do not pack down well to a gestalt representation, while others form new gestalts on close examination. This process of gestalt analysis and synthesis runs behind the conversation we have here.


Gary Lachman is the author of twenty-one books on topics ranging from the evolution of consciousness to literary suicides, popular culture and the history of the occult. He has written a rock and roll memoir of the 1970s, biographies of Aleister Crowley, Rudolf Steiner, C. G. Jung, Helena Petrovna Blavatsky, Emanuel Swedenborg, P. D. Ouspensky, and Colin Wilson, histories of Hermeticism and the Western Inner Tradition, studies in existentialism and the philosophy of consciousness, and about the influence of esotericism on politics and society. He writes for several journals in the UK, US, and Europe, including Fortean Times, Quest, Strange Attractor, Fenris Wolf, and his work has appeared in the Times Literary Supplement, Times Educational Supplement, Guardian, Independent on Sunday, Sunday Times, Mojo, Gnosis and other publications. He lectures regularly in the UK, US, and Europe, and his work has been translated into a dozen languages. He has appeared in several film and television documentaries and on BBC Radio 3 and 4 and is on the adjunct faculty in Transformative Studies at the California Institute of Integral Studies. Before becoming a full-time writer Lachman studied philosophy, managed a new age bookshop, taught English Literature, and was a Science Writer for UCLA. He was a founding member of the pop group Blondie and in 2006 was inducted into the Rock and Roll Hall of Fame. Lachman was born in New Jersey, but since 1996 has lived in London, UK. 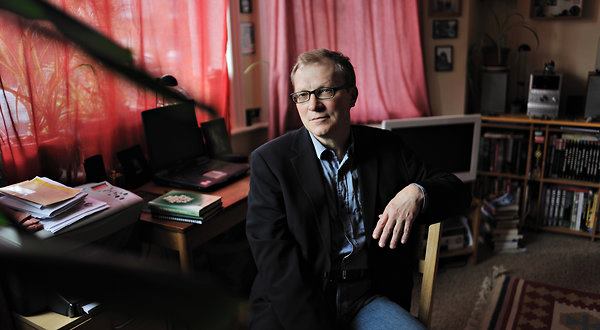 I apologize for the occasional gaps in sound quality. These newfangled trans-Atlantic fiber-optic cables are sometimes troublesome. Or perhaps Mercury is in retrograde.

Thomas McEvilley on Connections between Greek and Indian Philosophy

I remember playing some very strange arcade games in Columbus in the early 80's that had really dodgy graphics, but none that made you go crazy, though there were rumors...

Email ThisBlogThis!Share to TwitterShare to FacebookShare to Pinterest
Labels: film

There are simple reasons why both Wallace and the old Tyrell replicants want the child: Wallace wants to be able to produce slaves faster than he can manufacture them, so those replicant slaves must be able to reproduce. It also bothers him that Tyrell knew more about bioengineering than Wallace. The replicants want the child because it is a sign that they are "real" people, despite being synthetic. The child is therefore a sign of hope. It is also a matter of keeping the child and the free replicants safe and free from anyone who would exploit them. They are escaped slaves, fighting for the freedom of all of the enslaved.
The Blade Runner movies make extensive references to Gnosticism, an early Christian heresy, as well as Milton's Paradise Lost. Philip K. Dick, the author of BR's source material, and Ridley Scott share an interest in this material.
Dick went beyond interest: in February and March of 1974, he experienced a series of visions that he spent the rest of his life trying to explain in his fiction and personal papers. Among the other fascinating information conveyed in these visions was the idea that modern times were an illusion, covering the fact that we are all living in a time loop during the Roman Empire during the time of the Book of Acts. We are, he said, trapped in the Black Iron Prison of this false reality. There is, however, someone trying to rescue us, who he called variously VALIS, Zebra, or the Plasmate, and who he identified as the symbiotic divine entity Christ who merged with the man Jesus.
The original Gnostics believed that Creation occurred due to the fall of an emanation of God called Sophia or Wisdom from a higher existence, called the Pleroma. Sophia, in her desperation, gave birth to the Demiurge, a blind, evil, sometimes lion-headed god/Devil who believed himself to be supreme, and who in turn created the physical world, trapping Sophia and the sparks of true Divine power that are human souls. However, the Demiurge lacked access to the true power of creation, and could neither create nor destroy souls within the created world, only sterile matter and lesser demonic spirits. The souls yearned to return to God in the Pleroma, and would come to escape the prison of the world through gnosis or knowledge of the Divine truth, which is actually a process of anamnesis or unforgetting.
In Blade Runner 2049, food and human substitutes are produced by Wallace, though the land (and the replicants) remain sterile. Wallace, like the Demiurge Ialdabaoth, is blind, leonine, a Devil who believes himself to be the new God. His name sounds like walls, the domain of Saturn/Cronus, the dark and grim father of Zeus, and the symbol of the prison. He creates beings he refers to as "angels" who cannot reproduce as humans do, and which may not have human free will or whose will is constrained (emprisoned), like Luv, who weeps at evil but serves loyally and cruelly nonetheless.

The Tyrell pyramid in the first Blade Runner, representing the Temple of the Presence, God on Earth, full of light:

It has been assimilated by the Saturnine Wallace Corp (background), imprisoning the darkened pyramid in 2049:

Deckard and Rachael, from the first film, produced a child, who might be K.

K is also "Joshi's Dog”. Does Joshi's Dog have Buddha nature, as the koan goes? Is he a real boy? He certainly has someone's real memory.

Among the other problems, most of humanity's records have been lost. Perhaps Ana Stelline, a memory artist with a celestial name, herself imprisoned in a sterile, though light-filled enclosure, can help K and the others un-forget. Can Sapper, Freysa, and the other old replicants (fallen angels) protect the child and redeem the fallen world? Who knows.