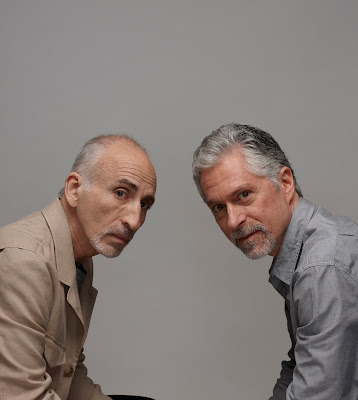 Barry Michels and Phil Stutz are two of the most sought-after psychotherapists in Los Angeles, particularly by creative professionals. They are also the authors of The Tools, a book that teaches you the techniques they use in their practice to help unlock creativity, decrease anxiety and to correct the negative patterns that interfere with your life.

In this podcast, we discuss the relationship between the Shadow (Carl Jung's term for a subconscious part of your mind that contains your inner shame and other unconscious material) and creativity, plus the three immutable rules of dealing with a perpetually changing world. We also talk about their next book, dealing with Part X, or the inner enemy that tries to sabotage your growth and development.

“But the worst enemy you can meet will always be yourself; you lie in wait for yourself in caverns and forests. Lonely one, you are going the way to yourself! And your way goes past yourself, and past your seven devils! You will be a heretic to yourself and witch and soothsayer and fool and doubter and unholy one and villain. You must be ready to burn yourself in your own flame: how could you become new, if you had not first become ashes?”

Paul Laffoley has Merged with the Infinite

Paul Laffoley, one of our favorite artists here at Bottlerocketscience, has died today. He will be sorely missed.

Thony Christie, historian of science and proprietor of the Renaissance Mathematicus and Whewell's Ghost stops by to talk about Galileo, Newton, the Copernican controversy, and why it was smart to believe that the Earth didn't move.

The story of how we came to understand that the Earth was not the center of the Universe is one of the most fascinating stories in the whole of the history of science. The debate over Copernicus' heliocentric model lasted for centuries, and was carried out by mathematicians, theologians, philosophers and scientists. Observational evidence initially favored a geocentric model, and definitive proof did not appear until long after the first precise data (captured by Tycho Brahe and compiled by Kepler) had persuaded most scientists of their truth.
Independent scholar Thony Christie takes us through the debate on this episode of Startup Geometry.

[0.0.16] How did you get into the study of the History of Science? Eric Temple Bell Men of Mathematics. History of Mathematics and Logic: Church’s list of formal logicians, Boole, Jevons, and others.

[0.6.30] What was a “mathematicus”? Fields of study: astrology, astronomy, mathematics, cartography, design of engines of war, (sun)dialing, volumetrics.

"DaVinci's Resume": Leonardo DaVinci once sent a letter describing his skills in some of these areas.

[0.14.46] Christoff Clavius. The Galileo Affair. Heliocentricity. Cardinal Barberini. Who can interpret the Bible? Cardinal Bellarmine. The difference between proof and speculation.

[0.47.47] Discussion of the various Renaissance world systems or models of the universe. Why it’s obvious that the Earth doesn’t move. Tycho Brahe. Johannes Kepler. Gilbert, On the Magnet. How it was finally proved that the Earth does move. Chris Graney on star sizes, Setting Aside All Authority. Torricelli.

[1.00.00] The Rudolphine Tables. Not proof, but Kepler’s system fits the data, so Kepler’s model is probably right. Heliometers and elliptical orbits. Bradley, 1725, finds elliptical movement of stars due to Earth’s movement. Christiaan Huygens. The Earth bulges at the Equator and is flattened at the poles. Later confirmed by stellar parallax, Bessel, 1838.

[1.08.18] Book recommendations. Richard Westfall, Life of Isaac Newton. John Heilbron, Galileo. Chris Graney, Setting Aside All Authority. Eric Scerri, The Periodic Table. My recs: Deborah Harkness, The Jewel House. (she also rediscovered The Book of Soyga, which was part of John Dee’s library, and is a really good fiction writer.) Lost Enlightenment S. Frederick Starr.
Posted by scott at 12:20 AM No comments: