A Message from the Rosebud Nursing Home

"If you let the Republican voter suppression steal the election, we're gonna burn this motherf*cker down!"
Posted by scott at 8:12 PM No comments:

for the zombie apocalypse, vote Romney.
Posted by scott at 6:19 PM No comments:

From a recent review of Edward Gorey's works in the LA Times:

In his letters to Peter Neumeyer, a university professor with whom he collaborated on three children's books, Gorey offered a mini-manifesto, "E. Gorey's Great Simple Theory About Art." Gorey being Gorey, his artistic credo could fit on the head of a pin. Simply put, it's "the theory ... that anything that is art ... is presumably about some certain thing, but is really always about something else, and it's no good having one without the other, because if you just have the something it is boring and if you just have the something else it's irritating."

Letters from the Front

A grim letter published in the Washington Post from Afghanistan in the waning part of the war from all around good guy, 1st Lt. Adam Swartzbaugh:


“Whether we are winning a war is irrelevant in my platoon,” Swartzbaugh said in his letter to the editor that was posted in the newspaper’s full-page “Free For All” section on Saturday.

“What do my men and I consider a successful mission? It is when we have done something, anything, to further protect the lives of our soldiers, period,” Swartzbaugh said. “In so far as we are able to do this, my men will continue pushing themselves further and deeper in every dimension of the physical, psychological and spiritual -- to the very limits of war, and to the end of life.”

Email ThisBlogThis!Share to TwitterShare to FacebookShare to Pinterest
Labels: war and military

Can Mitt Romney close the deal tonight? This is his last chance to show the American people that he's going to be the best representative for America out in the world. We know Obama can do the job, but we don't have the answer to whether the Mittster can do any better; I think that he's another smirking plutocrat, but I'm prepared to be proved wrong. Let's see what happens tonight.
Posted by scott at 12:39 PM No comments:

Akihiro Yanai does some wonderful contact work in this video.

Email ThisBlogThis!Share to TwitterShare to FacebookShare to Pinterest
Labels: cool

Traveller, there is no path,
The path must be forged as you walk.


-Antonio Machado
Posted by scott at 1:23 PM No comments:

LP: The Mountain of Books

Those Dutch sure know how to build a library. Just look at it. 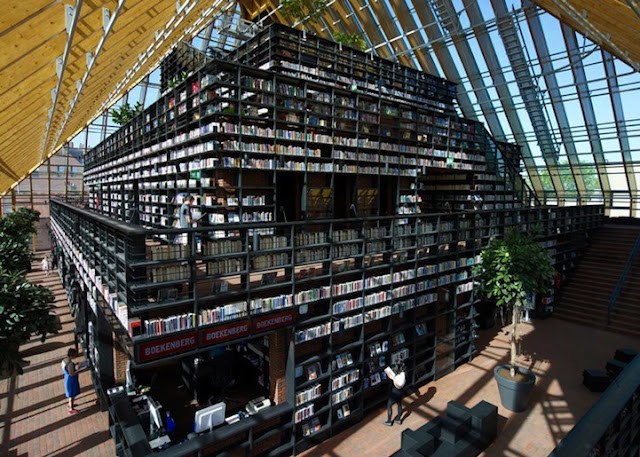 (via marginal revolution)
Posted by scott at 9:00 PM No comments:

Who Won the Debate?

If you believe that what is said is less important than how one looks when saying it, then clearly, Mitt Romney won the evening. It's a statement on the pundits that this was their nearly unanimous view. As far as it goes, Barack Obama needs to speak in short, concrete sentences, use periods at the end of sentences rather than dashes, and look like he's actually more interested in being reelected than the average voter is in reelecting him. It would also be helpful if Mr. Obama didn't betray Social Security in the course of the upcoming budget negotiations, as he did in the debate.

On the other hand, the candidate who is not Mr. Obama did the following:
And Mr. Obama got Mr. Romney to do all that by, as Paul Krugman puts it, "going for the capillaries."

If one looks at the content together with the optics, it is much less clear who won last night.
Posted by scott at 1:16 PM No comments: