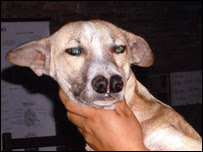 I initially thought this description of a two-nosed dog might be an April Fool's item on the part of the BBC, with a bit of Photoshoppery, but this appears to be real:

Colonel Blashford-Snell first encountered a Double-Nosed Andean tiger hound called Bella in 2005 when he was carrying out reconnaissance for this year's expedition in the area near Ojaki.

He told Radio 4's Today programme: "While we were there, sitting by the fire one night, I saw an extraordinary-looking dog that appeared to have two noses.
"I was sober at the time, and then I remembered the story that the legendary explorer Colonel Percy Fawcett came back with in 1913 of seeing such strange dogs in the Amazon jungle.

"Nobody believed him, they laughed him out of court."

A few years ago, I saw William Gibson give a reading of Pattern Recognition in the St. James Cathedral in Chicago. With the gold leaf and religious imagery overlaid by a network of tech equipment and halogen lights, it seemed like a fitting locale for the author of Neuromancer. I wanted to suggest to him that he visit Jaume Plensa's Crown Fountain in Millennium Park, another Gibsonian location, but didn't get the chance.

On Monday, I went to his reading of Spook Country, held in the much less Gibsonian Borders on Michigan Avenue. Attended by a large contingent of hackers and ninjas of a wide variety of age groups, the biggest surprise was the predominance of oddly named people (Cinchel, Aramigosta, 9Jane) and people from unusual countries (Latvia, Belarus) getting their books signed, often with really long notes appended, until his hand gave out.

It is seemingly hard to ask concrete questions of the man. I for one drew a complete blank. He had some useful advice for writers, though, beginning with Damon Knight's dictum on writing: "Alice in Wonderland good, Alice in weird Wonderland good, weird Alice in weird Wonderland bad". He also had a great story about his first writing teacher who had spent several years writing specifications for the military and whose idea of a good writing assignment was, "give me 500 words describing this pencil in great detail...wait, since you're a beginner, just do the eraser, or maybe that metal bit that goes around the eraser here at the end." This resulted in him being able to do great descriptions of little machines "like a particular kind of switchblade" but left gaps in the early novels that he can detect now.
Posted by scott at 1:52 PM No comments:

237 reasons to have sex, a comprehensive list from a University of Texas study. One must assume that not all reasons appeared with equal popularity. Somehow, one is also reminded of other stupendously long lists, such as the fictitious 548 facial expressions, and of long lists of possible sins in Medieval church manuscripts (which can now be used as lists of suggestions of possible ways to have sex which one has decided to have for one of the 237 reasons, much as one used to use the purity test list of questions as a compendium of ways to while away the winter evenings when one was in college).
Posted by scott at 1:45 PM No comments: