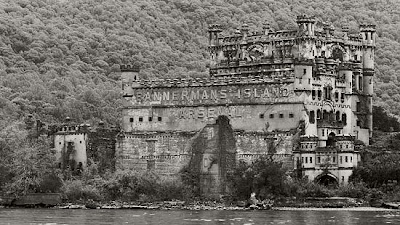 BLDGBLOG gets a lot of respect around the net these days because, well, they're awesome. And they're obsessives and experts in a very specific sense.

The castle was Bannerman’s vision and his execution. It was creviced and encrusted with battlements, towers, turrets, crenellations, parapets, embrasures, casements, and corbelling. Huge iron baskets suspended from the castle corners held gas-fed lamps that burned in the night like ancient torches. By day Bannerman’s castle gave the river a fairyland aspect. By night it threw a brooding silhouette against the Hudson skyline.

It's doubly cool because the castle (renamed "Butterman's") was used as a setting in John Crowley's AEgypt books.
Posted by scott at 7:04 PM