New York magazine's issue on home design includes a set of six amazingly constructed houses. The amazing part comes in part from the heavy DIY component, where palatial interiors have been constructed with glue guns, plywood and secondhand furniture. 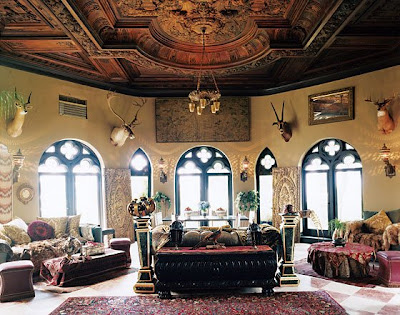 Kohle Yohannon refurbished an 18 room Yonkers mansion "single-handedly", and now rents it out as a site for films. 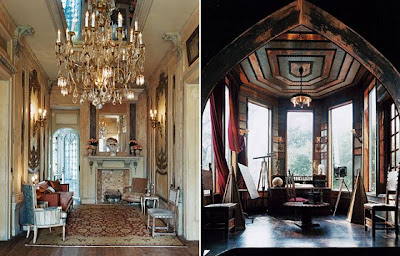 (photos: Jason Schmidt)
I'm particularly fond of the Observatory Room, "like something out of Around the World in 80 Days" with walls covered in mica, copper and Moroccan rivets, and featuring church furniture and scientific apparatus.

Update: from an earlier interview with Kohle Yohannon

Mr. Yohannan is no less colorful. He tools around Yonkers on a Ducati motorcycle or in a secondhand Bentley. Born in San Francisco to parents of Iranian and French extraction, he grew up in a rambling Beaux-Arts house that his family had restored on a shoestring budget. "My dad was a mechanic, but my mom had really great taste," he said. "Our neighbors were doctors and lawyers who drove Mercedes, and we were the grease monkeys who fixed their cars."

At 16 he abandoned a fledgling career cleaning spark plugs for 25 cents apiece to become a fashion model, strutting his stuff down the catwalks of Barcelona and New York, where he also enrolled at the Fashion Institute of Technology and learned to make dresses. When he was 22 — during his sophomore year at Columbia University — he became the fourth husband of Mary McFadden, the fashion designer, who was 51; the relationship ended 22 months later in well-publicized recriminations. (In court papers, Mr. Yohannan described Ms. McFadden as an "older, selfish, willful" woman who demanded "rough sexual treatment" and "group sex sessions." She called him a "toy boy" and a "flake." He left the marriage with a settlement of $110,000 and the couple's pet cockatoo, Socrates Zinzar Big Bux.)