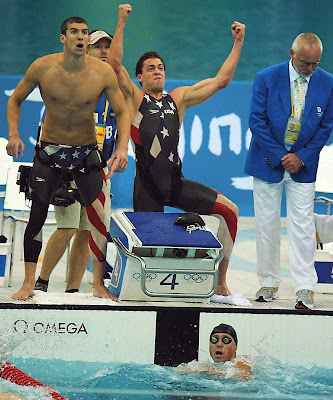 Photo: John W. McDonough/SI
The most thrilling sporting event to watch since the Nadal/Federer match of the century at Wimbledon. Jason Lezak swam an unbelievable anchor leg to beat Alain Bernard, the world-record holder, who led him by 6/10ths of a second at the outset, gaining the gold for the US men's team. Just watching it, you couldn't tell why he was moving faster, just that he was; also impressive, the last reach for the finish, where his arm seemed to stretch impossibly far. From SI:

"I just happened to have the swim of my life at the right time," Lezak said.

"The whole thing was remarkable," said Orjan Madsen, the German head coach. "It was one of those moments where you just sit back and say, 'Jesus Christ.' If I wouldn't have seen [Lezak overtaking Bernard] with my own eyes, I wouldn't have believed it."

"There's never been [an anchor swim like that] in my memory," American head coach Eddie Reese said. "Not running down somebody who holds the world record, who's on their game. That was incredible. ... It has to be in the unbelievable category. That's the biggest word I know."

Email ThisBlogThis!Share to TwitterShare to FacebookShare to Pinterest
Labels: sport