Elegy for the Polaroid 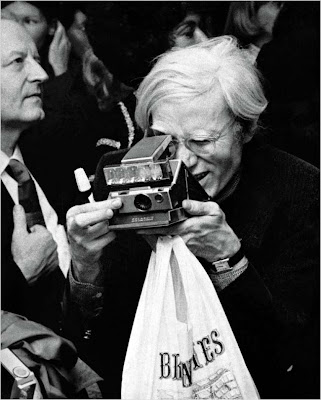 Polaroid film is going out of production at the end of next month, since everyone and their photographer cousin have basically moved to digital. Still, we'll miss the particular aesthetic: the square format, fade-in development and slightly off-kilter coloring that made for a unique user experience. The pictures felt more immediate than anything else, and we'll miss the gentle wave of encouragement that we used to perform (supposedly unnecessarily) to encourage proper development. The NYT has a good send-off here.

My father would check his watch, shaking the covered snapshot as if the photograph were a thermometer. Then at the right moment, with a surgeon’s delicate hands, he would separate the negative in a single motion and reveal — well, who knew what.
Because that was part of the beauty of the Polaroid.

Mystery clung to each impending image as it took shape, the camera conjuring up pictures of what was right before one’s eyes, right before one’s eyes. The miracle of photography, which Polaroids instantly exposed, never lost its primitive magic. And what resulted, as so many sentimentalists today lament, was a memory coming into focus on a small rectangle of film.

Nice post. I stumble upon your blog because I get Goggle alerts about Polaroid. I am a professional photographer/mixed media artist who has spent a lot of time both working with Polaroid processes, and teaching them. Things like Polaroid transfers, emulsion lifting... I must say that I love Polaroid for the same reason I always liked working in the darkroom, the mystery. Watching a print come up in a tray is like watching a Polaroid develop. Ahhhhh, I will miss it.

It's that gradual coming-into-visibility coupled with the unique smells that make the photo-making (as opposed to shooting) processes so enjoyable. Plus, you get to be a bit of an experimenter with the advantage of quick results.