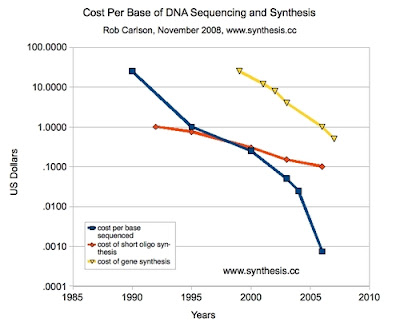 Rob Carlson notes the falling prices for gene synthesis and sequencing, at about $0.50 and $0.001, respectively, in 2008. Anders ponders whether we'll find the knee for these cost curves, as we did with Moore's Law.
In other news, researchers from the University of Pennsylvania are starting a clinical trial to produce an AIDS-resistant subset of immune cells:

Since the discovery that a small portion of people who are exposed to HIV do not get infected, scientists have been working to discover the secret to those people's resistance and how to make others resistant as well.

It turns out that most people have a gene called CCR5, which makes them vulnerable to HIV infections. The naturally resistant people have mutant CCR5 genes that inhibit HIV.

Previously, scientists found that by cutting the CCR5 gene out of white blood cells involved in the immune response known as T-cells, they could protect a tube full of human cells from the virus. The gene editing technique relies on proteins called zinc finger nucleases that can delete any gene from a living cell.

In theory, zinc finger nucleases could give that immunity to anyone.

The procedure is simple: Take some healthy T-cells out of an HIV patient, clip out their CCR5 genes, grow more of these clipped T-cells in a dish, and then put them back in the patient.

This is the next step in the development of customized secondary immune systems, capable of dealing with specific pathogens, enhancing wound healing, or replacement for immunocompromised individuals. The outstanding technical questions include:

If all of that can be worked out, this would become a hugely important medical technique in coming decades. I look forward to watching this story develop.

Email ThisBlogThis!Share to TwitterShare to FacebookShare to Pinterest
Labels: Science, The Future Is Now