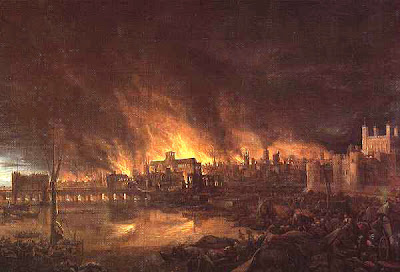 Mr. Pepys , his blog, has reached the date of the Great Fire of London.

When we could endure no more upon the water; we to a little ale-house on the Bankside, over against the ‘Three Cranes, and there staid till it was dark almost, and saw the fire grow; and, as it grew darker, appeared more and more, and in corners and upon steeples, and between churches and houses, as far as we could see up the hill of the City, in a most horrid malicious bloody flame, not like the fine flame of an ordinary fire. Barbary and her husband away before us. We staid till, it being darkish, we saw the fire as only one entire arch of fire from this to the other side the bridge, and in a bow up the hill for an arch of above a mile long: it made me weep to see it. The churches, houses, and all on fire and flaming at once; and a horrid noise the flames made, and the cracking of houses at their ruins.

Here's what the area looks like now, as viewed from the Fire Monument, which was built by Christopher Wren and Robert Hooke, as part of their reconstruction of London after the fire.

Email ThisBlogThis!Share to TwitterShare to FacebookShare to Pinterest
Labels: history