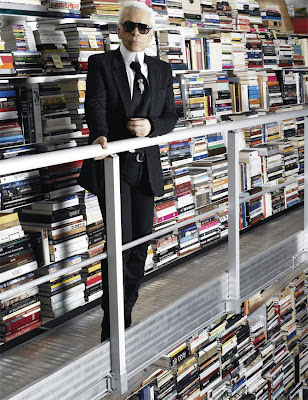 Your relationship to technology is kind of interesting.
Well, I hate telephones. I prefer faxes because I like to write.

Who are you faxing? Nobody faxes anymore. You’re like the only person with a fax machine.
People I’m really friendly with have faxes. Anna Wintour has one. We speak via fax. And in Paris I send letters to people.

That’s a lost art.
I have somebody to deliver letters all over every day.

You send a note over.
Yes, I send notes.

That’s very Victorian.
Yes, but there’s not one bit bad about the Victorian. Civilized living for me is like this. I’m not a chambermaid whom you can ring at every moment. Today, you know, most people act like they work at a switchboard in a hotel.

The whole culture of cell phones, texting, and instant messaging is very impersonal and also very distracting.
I’m not working at a switchboard. I have to concentrate on what I’m doing. The few people I have in my telephone are already too much. When I’m on the phone I talk, but I really want to be alone to sketch, to work, and to read. I am reading like a madman because I want to know everything.

I think that you might have Asperger syndrome. Do you know what that is? It’s a kind of autism. It’s like an idiot savant.
That’s exactly what I am. As a child I wanted to be a grown-up. I wanted to know everything—not that I like to talk about it. I hate intellectual conversation with intellectuals because I only care about my opinion, but I like to read very abstract constructions of the mind. It’s very strange.

That’s quite Asperger’s. There’s a boy who’s 20 years old; you can see him on YouTube. He’d never seen Paris from the air before and they flew him over Paris in a helicopter. Then they took him to a studio and he drew the entire city. Building by building, street by street.
I can do that with the antique Greek world.

That’s what I’ve heard.
If I had to make another choice I would have studied languages and antique civilizations.

Did you study Latin at all?
Yes, but for someone who speaks German it’s easy. It’s the same grammar and it’s pronounced the same way. For French speakers it’s much more difficult. When I was 10 or 12 years old I could speak Latin like I speak English. But I cannot speak Latin with French people. I don’t understand the way they pronounce it. For me, they don’t pronounce it right. But I love dead languages. Homer was one of the first books I read when I was starting to read. I think the Iliad is still one of the greatest books in the world.

There's also a really good piece in this issue in which someone interviews a modern Viking about Viking fashion.

Red and blue were signs of wealth because they were the most difficult colors to make. For example, the only way to make blue stick to fabric was to mix it with urine from a man who had been partying for three days.

Ha. Yes, you had to cook the fabric in it. I have friends who’ve tried it and apparently it smelled so bad they had to evacuate the house and leave the windows open for two days. Cooked male urine does not smell good.