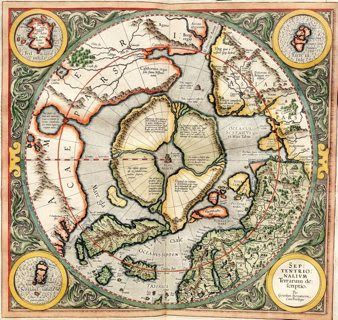 Along with the never written books and the utterly forgotten, there are the lost books that reach us only as shadows, reflections and fragments in other books, rumors and legends and hand-me-down tales. Megan Gambino talks about ten of these at Smithsonian:

In the 14th century, a Franciscan monk from Oxford, whose name is unknown, traveled the North Atlantic. He described the geography of the Arctic, including what he presumed was the North Pole, in a book called Inventio Fortunata, or “The Discovery of the Fortunate Islands.” He gave King Edward III a copy of his travelogue around 1360, and some say an additional five copies floated around Europe before the book was lost.

What followed next was a game of telephone that stretched across centuries. In 1364, another Franciscan described the contents of Inventio Fortunata to Flemish author Jacob Cnoyen, who, in turn, published a summary in his own book, Itinerarium.

Unfortunately, Itinerarium also went missing—but not before Gerard Mercator, one of the most prestigious cartographers of the 16th century, read it.

Mercator, writing to an English scientist named John Dee in 1577, cribbed word for word from Itinerarium’s description of the North Pole: “In the midst of the four countries is a Whirl-pool, into which there empty these four indrawing Seas which divide the North. And the water rushes round and descends into the Earth just as if one were pouring it through a filter funnel. It is four degrees wide on every side of the Pole, that is to say eight degrees altogether. Except that right under the Pole there lies a bare Rock in the midst of the Sea. Its circumference is almost 33 French miles, and it is all of magnetic Stone.”

When Mercator published a world map in 1569, he used this description as the source for his illustration of the Arctic—based upon the third-hand summary of a lost book written by an unknown monk 200 years earlier.