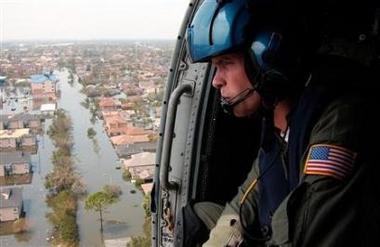 Thanks to Hurricane Katrina, everyone must leave New Orleans.

NEW ORLEANS - The governor of Louisiana says everyone needs to leave New Orleans due to flooding from Hurricane Katrina. "We've sent buses in. We will be either loading them by boat, helicopter, anything that is necessary," Gov. Kathleen Blanco said. Army engineers trying to plug New Orleans' breached levees struggled to move giant sandbags and concrete barriers into place, and the governor said Wednesday the situation was growing more desperate and there was no choice but to abandon the flooded city.
"The challenge is an engineering nightmare," Gov. Kathleen Blanco said on ABC's "Good Morning America."
...
A helicopter view of the devastation over Louisiana and Mississippi revealed people standing on black rooftops, baking in the sunshine while waiting for rescue boats.
..."Oh my God, it was hell," said Kioka Williams, who had to hack through the ceiling of the beauty shop where she worked as floodwaters rose in New Orleans' low-lying Ninth Ward. "We were screaming, hollering, flashing lights. It was complete chaos."
Looting broke out in some New Orleans neighborhoods, prompting authorities to send more than 70 additional officers and an armed personnel carrier into the city. One police officer was shot in the head by a looter but was expected to recover, authorities said.
A giant new Wal-Mart in New Orleans was looted, and the entire gun collection was taken, The Times-Picayune newspaper reported. "There are gangs of armed men in the city moving around the city," said Ebbert, the city's homeland security chief. Also, looters tried to break into Children's Hospital, the governor's office said.
...
Posted by scott at 11:51 AM

If you wanna donate to the victims of Katrina, click on my blog link. thanks! God Bless you.
http://chuys.blogspot.com/2005/09/help-victims-of-hurricane-katrina.html