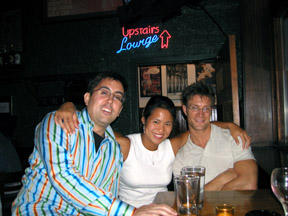 So, I've reached 35. Adulthood is defined as that point when your birthday rolls around and you no longer think about the presents you're going to get, but instead are just genuinely relieved (and maybe a little surprised) to be above ground and moving around.

Several friends were kind enough to drink the new year with me at Schuba's. At left are Eric, Joyce and Mark. Alden stopped by as well, but almost everyone else was out of town. How could they have left the year's most important holiday off their calendars?

Joyce, Mark and I are engaged in a series of fitness dares, which have included ashtanga yoga classes and the Run Hit Wonder thing. Mark's 35th was a few days ago, so we need some more dares to complete over the course of the coming year. Suggestions are welcome.

Mom told me, "you've never missed a birthday before."

I said, "I won't be missing this one either. I carry it with me. You're the one missing it."

In other news, Chad Fox is also moving up in the demographic categories. I knew the kid had great taste, but to share a birthday with me (and Joan Jett) practically moves him up to godhead.
Posted by scott at 12:20 AM