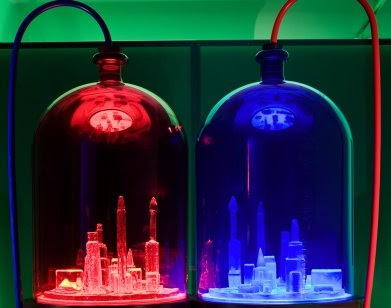 Mike Kelley recently displayed a series of sculptures of the Bottled City of Kandor at the Metro Gallery. Each city represents the instantiation of a version of the Kryptonian city as drawn by a different Superman artist. So, the sculptures themselves represent a history of a shared imaginary space, collated and reinterpreted in 3d by Kelley.

I'd referenced the bottled city of Kandor in writings as a symbol for alienation; it has a kind of Sylvia Plath-Bell Jar overtone to me. But I liked that it had the sci-fi element as well. I did a project in 1999 for a show in Bonn-a turn-of-the-century-theme show with a technological slant. So I decided to work with an out-of-date image of the "future." Kandor is a prototypical "city of the future." My idea was to link it to the technological "web space" of the Internet-and the failure of that "utopian" system to actually bring people together physically-where people can only connect virtually in a very alienated and disconnected manner. Some years later, I decided to go back and focus on Kandor as a physical object; in the Bonn show there were no bottled cities, only images of it lifted from Superman comic books and presented as collages, and a computer animation of various versions of the city morphing into each other. When I researched it, I discovered that Kandor had never been drawn the same way twice in the Superman comics. It was such an unimportant part of the Superman mythos that a fixed city plan was never developed. That interested me, because I was working on the Educational Complex sculpture-a model combining every school I had ever attended. I was interested in architecture as it relates to memory-how unfixed our memories of space are. I had been trying to draw architectural spaces from memory. My memories of floor plans were all wrong-big patches of space were missing. So I related that inability to remember such spaces to repressed memory syndrome. In the Jablonka exhibition I decided to downplay such references to focus on the beauty of the bottled cities as objects. I produced 20 different bottled cities based on images from the comics; they're all supposed to be the same city, but each one is unique. I thought that was an interesting paradox-that all of these different models were supposed to represent the same place. I only had time to finish 10 cities for that show; the remaining group will be presented at Gagosian Gallery in New York next year.