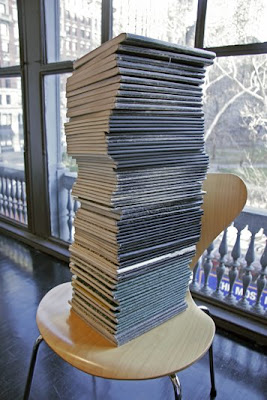 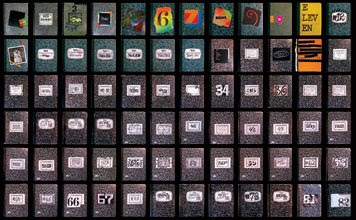 Over 26 years, designer Michael Beirut has filled 85 notebooks with professional material. Two are lost, one was recovered from the roof of a taxi that had traveled 10 blocks.

I use them in order. Tibor Kalman once asked me why I didn't have a different notebook for every project. I have to admit, this would be more useful. But I don't. I fill each one up and then move to the next one, the projects all jumbled together. Starting with the third one, every one of them is numbered. Except for two at the very beginning that used gridded paper, they have blank, unlined pages. I hate gridded paper (but not as much as lined paper.) There have been times when it's been really difficult to get unlined composition books, which I gather are oddly unpopular. One time I found a supplier who would only sell them in bulk and I bought a whole boxful. I thought these would last the rest of my life, but I gave a lot away, which I regret. Now they're gone.