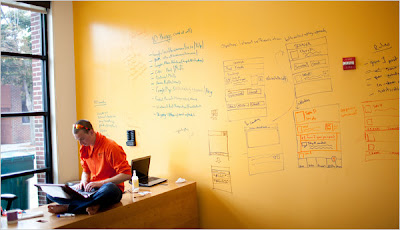 Just how crazy should you be to be a great entrepreneur? The answer, as with so many things, is: a little bit.

Interested? Before you answer, consider that the man displays many of the symptoms of a person having what psychologists call a hypomanic episode. According to the Diagnostic and Statistical Manual — the occupation’s bible of mental disorders — these symptoms include grandiosity, an elevated and expansive mood, racing thoughts and little need for sleep.

“Elevated” hardly describes this guy. To keep the pace of his thoughts and conversation at manageable levels, he runs on a track every morning until he literally collapses. He can work 96 hours in a row. He plans to live in his office, crashing in a sleeping bag. He describes anything that distracts him and his future colleagues, even for minutes, as “evil.”

This theory of the weak version of some disorder resulting in an improved adaptation under specific circumstances fascinates me. Previously, Robert Sapolsky expounded this theory in relation to religion: that people who are schizotypic (weakly schizophrenic) make great shamans, people who have a touch of temporal lobe epilepsy have visions and become hypergraphic, and those with a touch of OCD make great ritualists and priests. Tyler Cowen and others have talked about how Asperger's neurovariants make great tech geeks. This is another neat example here.
Posted by scott at 8:53 PM

Email ThisBlogThis!Share to TwitterShare to FacebookShare to Pinterest
Labels: Entrepreneurship