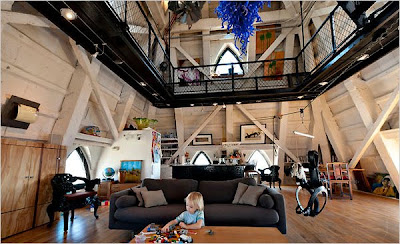 Michael Tortorello and Stuart Isett of the NYT visit a pyramid-shaped apartment located on top of Seattle's Smith Tower. I love these apartments that have very specific architecture, and that aren't part of a big residential development, but it's got to have taken a lot of work to fix up. Fortunately, that seems to have paid off:

the main attraction of a night at the top of Smith Tower must be the Imax-strength views: Puget Sound and the Olympic Mountains to the west, the Cascades to the east and, below, thousands of people doing the things they do when they believe no one is watching.

From the apartment she calls the “Lighthouse,” Ms. Franklin can see almost the entire city. But the city cannot see her. So the residence on top of the tower has taken on the status of an urban legend.

The tour guides around Pioneer Square can be heard to claim that “there’s a shut-in who’s lived up there for 80 years and has 200 cats,” said David Lahaie, 51, an energy and recycling executive. Mr. Lahaie is skeptical, to say the least: he lives in the apartment himself and is Ms. Franklin’s husband.

Stephen Willis, the Smith Tower’s docent and de facto historian, has encountered many odd theories in the 10 years he has guided visitors through the building. “I heard the other day that it’s still family owned by the Smiths,” the heirs of the Smith Corona typewriter fortune. “They haven’t had a stake in the building since the mid-1920s.”