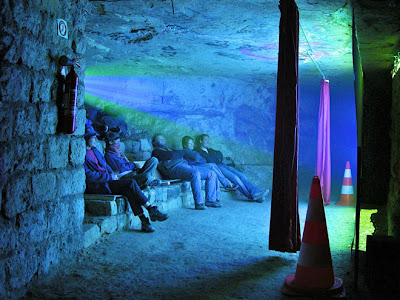 Paris is famous for having a large number of movie theaters. I'm more impressed by the number of underground ones I hear about. Underground as in covert, and underground as in literally subterranean. We've previously linked to stories about Parisian urban exploration group UX, and this month, Jon Lackman has a fascinating interview with them, published in Wired, in which, among other things, they are sued for surreptitiously restoring a 19th century clock belonging to the Pantheon:


As soon as it was done, in late summer 2006, UX told the Pantheon about the successful operation. They figured the administration would happily take credit for the restoration itself and that the staff would take over the job of maintaining the clock. They notified the director, Bernard Jeannot, by phone, then offered to elaborate in person. Four of them came—two men and two women, including Kunstmann and the restoration group’s leader, a woman in her forties who works as a photographer—and were startled when Jeannot refused to believe their story. They were even more shocked when, after they showed him their workshop (“I think I need to sit down,” he murmured), the administration later decided to sue UX, at one point seeking up to a year of jail time and 48,300 euros in damages. Jeannot’s then-deputy, Pascal Monnet, is now the Pantheon’s director, and he has gone so far as to hire a clockmaker to restore the clock to its previous condition by resabotaging it. But the clockmaker refused to do more than disengage a part—the escape wheel, the very part that had been sabotaged the first time. UX slipped in shortly thereafter to take the wheel into its own possession, for safekeeping, in the hope that someday a more enlightened administration will welcome its return.

Meanwhile, the government lost its lawsuit. It filed another, which it also lost. There is no law in France, it turns out, against the improvement of clocks. In court, one prosecutor characterized her own government’s charges against Untergunther as “stupid.” But the clock is still immobile today, its hands frozen at 10:51.