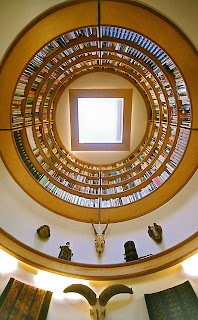 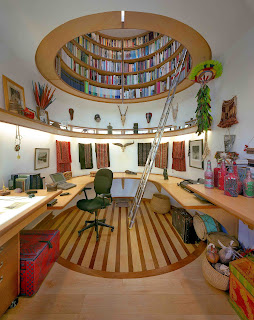 Travis Price Architects built Wade Davis an enviable office, featuring its own library dome, The Kiva of Knowledge. You probably know Wade Davis as the author of The Serpent and the Rainbow and other books, or as National Geographic's Explorer in Residence.

Wade Davis has one of the most coveted jobs in America – Explorer-in-Residence at the National Geographic Society. A cross between your favorite professor and a modern day Marco Polo, he spends of his time with his fingers in the dirt, traversing the globe as an anthropologist, ethnobotanist, photographer, and writer. When he’s home in Washington, he escapes to put pen to paper in his Travis Price-designed study, overflowing with books, manuscripts, artifacts, and inspiration.

“Travis did a studio on M Street in Georgetown for me,” Davis says, noting that in his current home, zoning prohibited a detached building. While many need light-filled rooms for inspiration, he wanted to avoid large windows opening onto a residential neighborhood and sought a cave-like atmosphere to disappear into his work. Subtle light was brought in by other means when the architect built a dome above his client’s desk (which Price describes as similar to the rotunda of the oracle’s temple at Delphi) and filled it with the books he uses the most. Davis whimsically calls the space his “Navajo kiva of knowledge.”

Previously: Best Thing of the Week: Wade Davis and the shit knife
Posted by scott at 2:02 PM