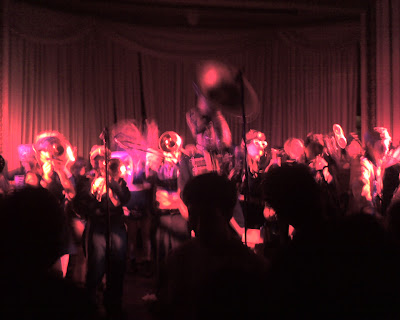 Lunch at a neighborhood cafe. Cheesesteak that's a little too dry served by a waitstaff that's a couple of people short.

That night I head out to see a band called Mucco Pazza at the Stan Mansion on Kedzie with Ed, Gina, Mark the Shark and a bunch of Gina's friends. A lot of interesting fashion choices and incomplete haircuts in the room. The band is a punk marching band with gypsy swing and early 20th c. classical influences (references to Shostakovich and Bartok, cheerleaders who chant about number theory). About 30 people on stage, when they're not playing from within the audience or on a balcony at the back or trumpeting out of the proscenium arch. A lot of short people keep pushing in front of me, and tall guys push in behind. Very loud, very hot.
Posted by scott at 7:00 PM

Email ThisBlogThis!Share to TwitterShare to FacebookShare to Pinterest
Labels: life