More on The Fall

The Onion AV Club has a lengthy interview with Tarsem on The Fall: 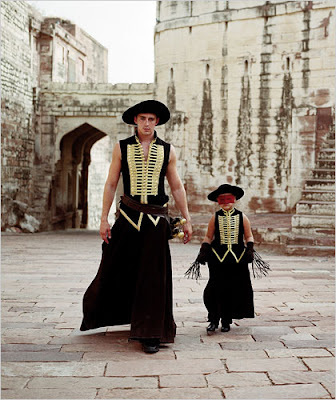 So I said that to the actors, the moment I met them on the set. I just said, "Here, I am your puppet. I will create the best atmosphere for you, and you tell me if anything is intrusive. You'll never get a situation like this, except when—" What [David] Fincher calls very lazy filmmaking, and I agree, is when you just put lights out there, go telephoto, shoot 10 cameras, throw it together—actors love that, 'cause they can be natural from far away. I had unfortunately chosen a style in which the camera was in your face. It was very Yasujiro Ozu, it was very static. I just said, "Nothing should move. Nothing should come and save me. If the situation's not working, I want to be screwed."


Unfortunately, the handheld, really gritty-shitty look is perceived as realism. In that style, I find that you can make a cupboard act. You shoot an ad and the actor is dreadful, so you just pick up the camera and shake it around, and then suddenly it looks like the actor can act. It separates boys from men, when people are sitting in the camera stand just observing. Instead, I picked a worst-case scenario by putting the camera up close.

On the other hand, I said "The moment we go on location, you will be my puppets."

There were a lot of unique talents on this movie. For one, Lee Pace delivers multiple performances simultaneously, including convincing cast and crew that he was actually a paralyzed actor playing a bedridden stuntman. He did this so effectively that he wasn't recognized when he walked around at the gym off set.

For another, Eiko Ishioka delivers amazing, operatic costumes for the fantasy seqences, as she did for The Cell. The costumes together with the sets and the props? art installations? by art director Ged Clarke to build the fantasy sequences of the film.

Thirdly, the lab that printed the film did an amazing job, producing Baraka-like levels of color saturation:

there's a guy called Lionel Kopp who used to run a lab in France that I absolutely adore. And he has a lot to do with this particular one. Because I went in with specific paintings, pigmented early color photographs from Russia, and blah blah and say "There's an aesthetic and a technique that has to get in here." If it was easy to do this kind of stuff, hey, everyone would hire relatives. It's not. And this guy really has an aesthetic that I absolutely adore and trust. So I was in Paris with him all the time. And when we had to set the look, I would just tell him stuff and he'd achieve it. It was difficult technically sometimes. But aesthetically, you know, I had a look in mind and had to achieve it.