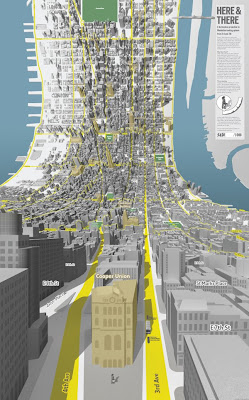 This forced perspective map set of Manhattan from up and downtown has been getting a lot of linkage lately. Jack Schulze has an essay on the making-of here, showing key influences and ideas, quotes Hockney and Iron Man, and generally has a good time of it:

The projection works by presenting an image of the place in which the observer is standing. As the city recedes into the (geographic) distance it shifts from a natural, third person representation of the viewer’s immediate surroundings into a near plan view. The city appears folded up, as though a large crease runs through it. But it isn’t a halo or hoop though, and the city doesn’t loop over one’s head. The distance is potentially infinite, and it’s more like a giant ripple showing both the viewers surroundings and also the city in the distance.

Warren Ellis sez, in his response to this essay (and an unrelated speech on Hauntology):

I’m struck suddenly by the idea of future archaeo-teams flooding abandoned cities with pink noise and getting something not unlike Burial’s "Raver" reverberating back from the rotting walls of ancient warehouses.