The Decline and Fall of the Dandy 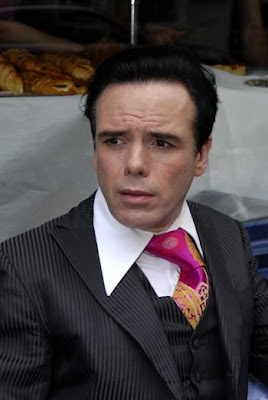 In the good old days, you could dress exceptionally well (and boldly) and get well known for it. These days, it just looks like you're trying too hard. Michael Mattis gives a rundown of the current crop of dandies, including BRS favorites Sebastian Horsley and Lord Whimsy. The verdict: nice tie, but there's something missing in the personality department.


The Regency got Brummell, a true sartorial innovator whose wit was as crisp as his country-washed linen. Count D’Orsay alleviated Victorian stuffiness with his manly charm, and the Edwardian Era was graced by Saki and Max Beerbohm, who all but reinvented the rapier wit. The Deco era had thoroughly modern Noel Coward, Lucius Beebe appeased Atomic Age anxiety with quaint anachronism as well as a poisoned pen, and the big-money ’80s saw the rise of another dandy satirist, Tom Wolfe.

Though they had different personalities and temperaments, these great dandies all shared certain qualities, including style, wit, aplomb and often a mild eccentricity. Many also enjoyed some measure of celebrity — how should we have known them otherwise? And while some dandies of the past certainly enjoyed their fame, the artists among them put their work first and did not pursue celebrity for its own sake. “L’homme est rien,” said Flaubert. “L’oeuvre est tout.”

But who in our present era is celebrated for his dandyism? When the words “dandy” and “dandyism” appear in print, what names are written in conjunction with them? Who, in the eyes of the media and public, are the successors of Brummell, D’Orsay and Beerbohm?

In a 2006 article, The Guardian attempted to answer these very questions. Published in light of Ian Kelly’s Brummell biography and the BBC miniseries “This Charming Man,” the article cites as Brummell’s successors, among others, two pop stars: Brian Ferry, a self-proclaimed “pimpernel” who, the author gushes, “now wears Prada, Hedi Slimane and Kilgour,” and Sean “P. Diddy” Combs, whose “ghetto fabulous” look consists of “jeans and $10,000 worth of jewelry around his neck.”