Tony Paiva produces richly colored, long exposure photographs lit by moonlight, flashlights and incidental lighting in the course of Urban Exploration. Now, he has a book of 115 of his best photos out. Here are some of the pictures in it: 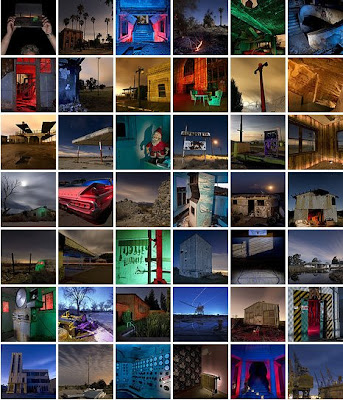 The description from the Chronicle Books website:"A booming subculture is on the rise: dubbed Urban Exploration, it involves sneaking into abandoned or off-limits factories, aviation "boneyards," decommissioned bases, and other derelict features of the military/industrial landscape. Troy Paiva is a foremost photographer of the UrbEx (as it's known to its devotees) phenomenon, and his distinctive blend of atmospheric night photos and lighting effects are the visual hallmarks of a scene that has drawn the increasing attention of the media and the public—as seen in recent programs on both the Discovery Channel ("Urban Explorers") and MTV ("Fear"). Illuminated by histories of the sites documented, Night Vision reveals the remarkable discoveries of a new generation of explorers."

Now I'd like to see Michael Cook's photos made into a companion book. Different style of photos, also UE focused.