Berlin is getting big mind share this week, not only because of this: 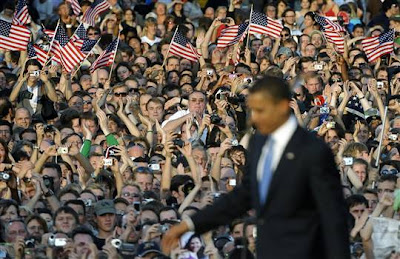 Barack Obama in Berlin photo: Michael Gottschalk/AFP
But also because it's teetering between being the place where everything happens and a super-laid back backwater, between being the site for luxury condominium projects and a techno-minimalist haven. In this fascinating cluster of articles, music and the city are connected, perhaps interchangeable:

when - as seems largely to have happened in much of Mitte, Kreuzberg, Friedrichshain, Prenzlauer Berg - an entire chunk of a formerly working city becomes a playground for an international of 'creatives', something odd happens. One often got the sense in Berlin that whatever was happening, it didn't really matter, nothing was at stake: pure pleasure becomes boring after a while, as does the constant low-level tick-tock of a techno designed seemingly for little else than just rolling along.

As Mick Jagger observed, this week, there's really no establishment left to speak of. And without that, there's no tension driving the Bohemian circuits. What was a way to fight "the Man" has become an aesthetic choice, like choosing shag carpet. What do you do when nothing's shocking, even to you?
Posted by scott at 10:39 PM