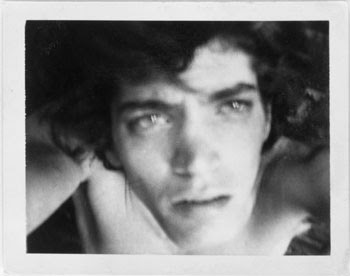 In the New York Observer, an oral history to accompany the new exhibition of Mapplethorpe's polaroids at the Whitney:

[O]ne gets the sense that the leap from Robert Mapplethorpe to “Robert Mapplethorpe” took hold in the summer of 1963, when the 16-year-old satyr was caught stealing gay pornography from a newsstand in Times Square. The aesthetics of gay male sexuality—and later, unflinching images of raw sex—would go on to color every period in his artistic career.

Mapplethorpe met Patti Smith in 1967. He was drinking the electric Kool-Aid. She was trudging through a terrible date. Their initial pairing was a symbiotic, if hasty solution that would define their relationship until Mapplethorpe’s death in 1989. They needed one another, always, but especially at the beginning of their bohemian squalor, when income was elusive, celebrity a dream.

His relationship with Smith is ambiguous, and the intimate details of their time together seem almost irrelevant. Smith, who was traveling while the interviews on the following pages were conducted, has said, “We were like two children playing together, like the brother and sister in Cocteau’s Enfant Terribles.”

It is particularly gratifying that Jesse Helms is dead, while Mapplethorpe's art lives on, and looks ready to do so for a great while to come.
Posted by scott at 10:52 PM