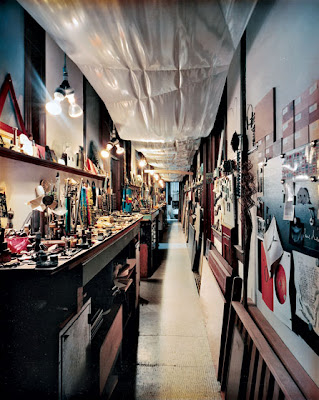 Photographer Jay Maisel bought a disused bank building in 1966 and lives there with his wife and daughter today. It's 35,000 sq ft and worth something like 400x what he paid for it. But the real joy is to have a lot of space for workshops and living space in Manhattan.

Maisel uses the first, second, and third floors as gallery spaces for his photography and art projects. (This magazine’s first cover was a Maisel photograph.) The fourth floor, which Maisel once rented out to Roy Lichtenstein, is a work-in-progress. The fifth has various workshops, like the Mylar-window-shade room.

But there have been no major changes to the interior. It’s essentially unchanged from the Germania Bank that architect Robert Maynicke designed for the then-bourgeois neighborhood (it cost $200,000 to build). The original safe-deposit vault, still in the basement, is the size of a generous studio apartment; the marks on the main floor where the teller booths once stood are still clearly visible.

The building is its own mini-frontier, and, as of 2005, an official landmark. “Here’s the deal,” Maisel says. “If you have a window that needs fixing, you fix it. If I have a window that is broken, I have to repair it, with approval, the way it was done in 1898.”...

Keith Haring used to cover the exterior in chalk babies, says Maisel, and that he liked, both for the spirit of the images and because they washed off so easily.

The building is still giving up its secrets. About a month ago, Amanda discovered a room she never knew existed. “It’s kind of in the mezzanine between the first and second floors,” she says. “It’s a cool little room. I don’t know why they don’t use it. It is just kind of full of pieces of mirror.”