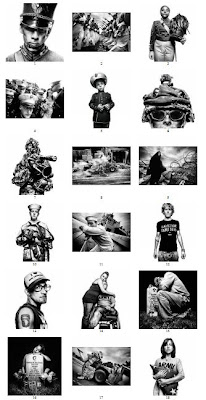 Photos: Platon, for the New Yorker
Who serves and why? One of the big questions that's been fascinating me for the past couple of years is: why do people make the decisions that they make? In particular, why do some people choose to do something life changing, often with long-term consequences; for example, why join the army, or become a priest, or get married?
The theory I've settled on is that there are always three kinds of reasons, and that the outcome is overdetermined by a combination of three clusters of answers to this question:

The reasons people give will often fall under #1, but the longer I look at it the more I think the core reason for any big decision is #3.

*Bonus quote from the photo essay thumbnailed above:

Sergeant John McKay, a marine whose uncle and grandfather were marines, and whose three-year-old son posed in uniform at the wedding of a cousin, also a marine, said, “He’s just waiting till he’s eighteen.” He went on, “I’m scared for him, but if he wants to do it I’ll support him.”

How strange in 21st century America to have your path in life picked out from birth.
Posted by scott at 4:00 PM

Email ThisBlogThis!Share to TwitterShare to FacebookShare to Pinterest
Labels: strategy