Gretchen Worden found her job in life, as curator of the Mutter Museum. In this obituary/review of the museum, the NYT mentions that the museum has just opened a new room named for her. From the article:

Ms. Worden used humor and charm to ease viewers past the initial gawking or revulsion the museum's collection might trigger. There was a serious message behind her sometimes madcap affect: that the human body is not to be feared or loathed, even when horrifically damaged or monstrously distorted. "While these bodies may be ugly," she wrote in her book of the museum's mute inhabitants,
"there is a terrifying beauty in the spirits of those forced to endure these afflictions." 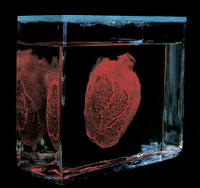 Surgical museums are examples of the sublime, in which beauty and terror sit side by side. The accumulation of deformity and disease becomes lovely by the act of cataloguing it, and comparing the infinite variety of the human form; the more so because these relics were gathered in the service of healing and better knowledge.
Posted by scott at 11:42 AM