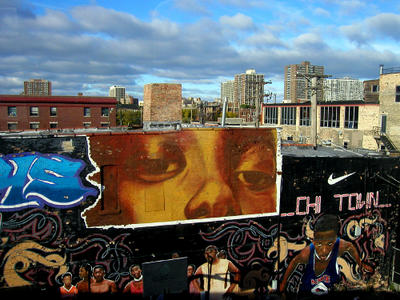 This mural is the visual high point of the commute up the Red Line El. Periodically, the boy's face is covered with signs, but these always vanish, or are moved to less expressive parts of the mural. I love the way that the boy's eyes seem to be looking in through a window at the trains passing by, as if the El were just a model of itself.

I also think of the replica of a Nagel painting that used to be up in the RA's room in Lewis dorm my freshman year, which was carefully left un-painted-over for many years, against the rules, in recognition of the quality of the artwork. Then, one spring break, the students returned to find that it had been painted over. An uproar ensued. A collection was taken up to perform the delicate act of restoration, or to pay a talented art major to repaint the wall. In the end, though, I think the money went to buy the end of year keg.
Posted by scott at 6:58 PM