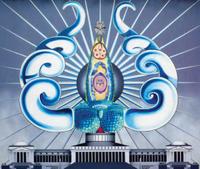 Paul Laffoley, who did the lovely cover for my friends over at Generation Hex, is what my Grandma used to call "quite a pistol".*

But he [Laffoley's father] had this quirky thing of not believing in gravity. And giving me a constant headache about that one. He would say if I showed any interest in gravity, I was becoming a dupe of the system. He could see indications I was beginning to believe in it.

Essay on how Gaudi cursed the World Trade Center, with various anecdotes on 20th century architecture.

Index of things from the Kent Gallery

*I might add that several of the Generation Hex kids qualify for pistolhood themselves.
Posted by scott at 12:41 PM